I've known since I started collecting American Girl that I was going to need something HUGE to display my dolls and their gigantic furniture. I read on various AG boards that some people have Pax wardrobes from Ikea. I decided it was my favorite method of displaying AG items, and went out to get one for myself!

I finally built it, rearranged my room, and found a space to put it in two nights. I found out after it was all put together that I skipped a step and nailed the back on upside down. Oops! It would only be a problem if I was going to attach it to the wall for support, but I'm not going to do that right now (as I intend to move at the end of this year). When I move, I DO want to attach it to the wall, but I think I can pry the nails out and fix it if need be. It will be a lot of work, though. SIGH, IKEA.

Here are some pictures of the wardrobe after I kind of threw everything in it, in the formations I sort of think I want. 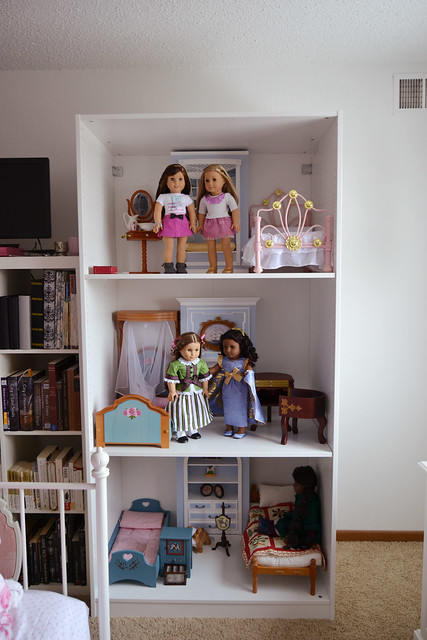 I bought the shorter of the two units, and as you can see it almost reaches my ceiling. At some point I had dreams of putting another scene on the top, but nothing will fit up there! I made the middle room taller than the other two. 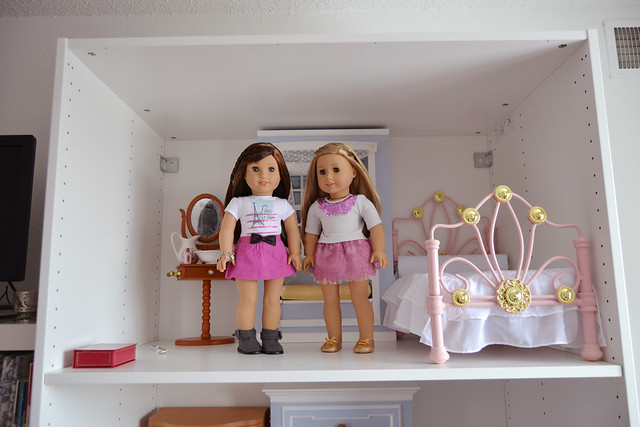 The top room will eventually be shared by Isabelle, Rebecca, and Samantha. It will have the window section of Caroline's parlor, Rebecca's bed, and Samantha's bed. But I don't have Rebecca, Samantha, or Samantha's bed yet, so for now it looks like this. Ha! And Grace doesn't have anywhere to go yet, so she's making friends with Isabelle. 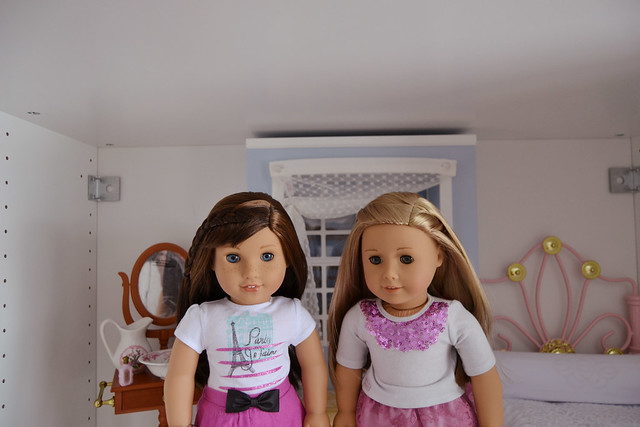 I wanted to show here that there's lots of room above the doll's heads even in the shorter rooms. There's even a tiny bit of room above Caroline's parlor! The Pax is gigantic, but it looks so nice and roomy in doll pictures. 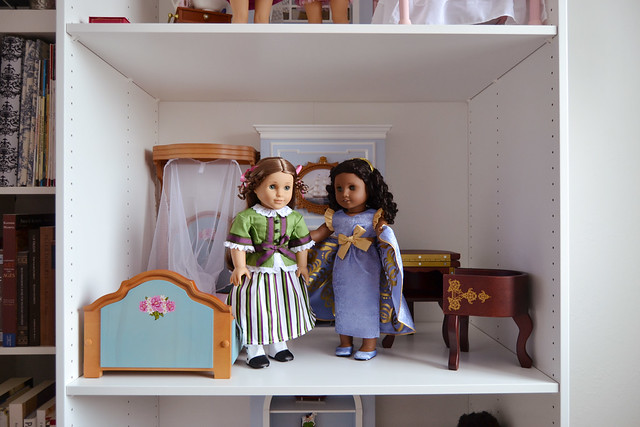 The middle room is pretty much going to stay as it is, with Caroline's fireplace section, the NOLA bed, and the NOLA desk. I'm not sure who is going to share it with Cécile in the future, but when I get a second wardrobe, Marie Grace is going to have a room of her own with the NOLA courtyard furniture, Grace, and Grace's silver cupcake cart. So many aspirations, so little money, room, and time. 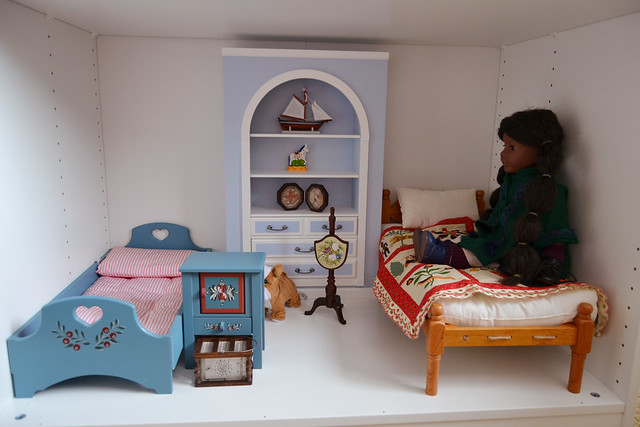 The bottom room is the saddest, haha! It's going to be Addy, Kirsten, and Caroline's room, with Caroline's shelf section, and Addy and Kirsten's beds. But I haven't quite figured out how to arrange it yet. And I don't have Kirsten or Caroline yet, so Addy's sitting on her bed all alone. She doesn't stand up very well by herself because she's old, so she has to sit. But the room is the same height as the top room.

Eventually, I intend to wallpaper each room and maybe get some stick on wood flooring. I was going to buy the wood grain shelves at Ikea to have mock-wood floors, but the wood grain color was all sold out, so I just got white because I'm too impatient to wait for it to come back in stock.

The specific Pax unit I bought was this one: m.ikea.com/us/en/catalog/products/art/20214566/ with two shelves to make 3 rooms. Eventually I'm going to buy doors so I can close it up, too.

Anyway, I just want to post updates of my dollhouse as I make it, and here's the first installment! I hope it helped or inspired some of you thinking about making an American Girl dollhouse as well!
Posted by Jaime Emma at 10:31 AM